If you’re like me right now in this time with the COVID 19 virus, you don’t have any more time available to you than you had before because you’re able to work from home the same hours you did before. Or you’re a medical professional, grocery store employee, or other essential worker who don’t have the choice but to go to work to help the rest of us. However, I know many people who don’t have the ability to work from home or their places of employment have closed and have more free time than they’ve had because of it. Many authors did sales to help those in this situation to have more books to read. Good for them, but I wasn’t ready to throw mine in yet. 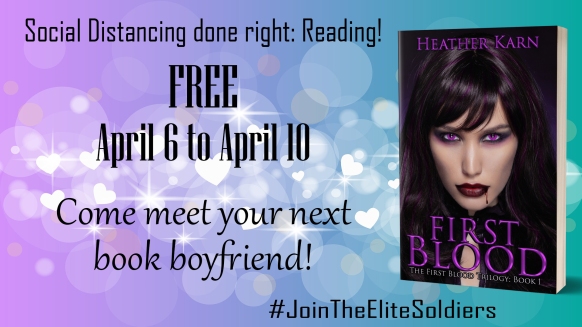 So, I held off, and now I have my freebie ready for those who are still looking for social isolating reads! It’s also a way to celebrate that Fourth Bunker, the next standalone in the series, has finished being written!! This book should be released this summer and more information will be given at a later time. However, I will say that this is Avery’s book and the events take place after Third House. Thus far, betas are loving it!

If you’ve read First Blood and enjoyed it, please reach out to your friends and let them know it’s free! Hopefully it can spread some good vibes during this rough time in our lives. I know I’m handling social isolation much better than so many of my friends and family, but many others are like them and this is a difficult time. Hopefully you’ll enjoy this book and it can bring some fun to your life.

Like most other college students in the United States, Koda Niklane’s dream is to join the government’s most advanced military unit: the Elite. Since the President’s great reveal of supernaturals living amongst humans, every college student is required to Interview for the Elite. Being human and unable to fight are setbacks for Koda, but she soon learns she isn’t quite as human as she’d thought, or rather, she’s not human at all.

When a purple-eyed blood drinker named Raven Cartana, a Captain in the Elite, announces publicly that she’s one of his kind, Koda refuses to believe him. As her new Elite trainer, Raven’s job is to keep Koda alive and teach her the ropes. Teaching is the easy part as Raven, Koda, and their team work to keep the streets safe from Threats. It soon becomes apparent that keeping Koda alive will be much harder than Raven had anticipated as the attacks on her become more personal.

As Koda works with Raven and the Elite, she can’t help but wonder how much of herself will remain once her maturity has finished. Will she still be Koda, or will she be something different? And is that why someone has their sights set on her?