I can’t believe it’s already time for another Snippet Saturday! This week I had the chance to do a cover reveal for my upcoming release, Phoenix Awakened. Today’s snippet comes from the opening scene of that book. If you like it, the book is only $.99 on pre-order!

The keys clattered against the scarred and beat up desk where I tossed them the moment I strode through the apartment door. It had been yet another hellish day on the job and already tomorrow didn’t look much better. Sure, my promotion, if that’s what it could be called, now limited how many times a day I was yelled at, cussed at, and smacked around, but that didn’t mean it never happened. It meant it happened less often.

Kurt, my new boss, was better than most. He didn’t yank my ponytail until I was in tears or slap me. Nope, he gave me a pay cut. A large one. All because I’d lost some minorly important paperwork. I still wasn’t certain that the lady who I’d replaced hadn’t lost it, but I hadn’t found it yet either, so my argument was null and void. Not that I would argue with Kurt. None of us did.

With my thoughts on Kurt and my new, almost nonexistent budget, I flipped off the light I’d turned on when entering my apartment and settled for dinner in the dark. Thankfully my shifter eyesight made searching through cupboards for a valid excuse for a meal possible. However, it didn’t help fill the near empty shelves. There wasn’t much left to eat or in the bank.

“Looks like another night of dry cereal,” I grumbled to the darkness, setting a bowl on the counter as I weighed the almost empty box in my hand. Too light. Much too light.

Pouring half of what remained in the box into the bowl, I scowled at it before tucking the flaps closed and setting the container aside. All it took was three short steps to cross the studio apartment to sit on my rickety twin size bed. The metal frame screeched when I sat my weight on it and every spring in the mattress pushed against me.

The first chomp of cereal made me cringe. It wasn’t nearly as delicious as it would be with milk, and that was out of the question since I’d run out a week ago and couldn’t afford anymore yet. If I could consult the dragon within me, she’d tell me to bite into a juicy steak, but that was beyond hopeful. It would take a serious miracle.

A hard knock alerted me to company. My sharp hearing should have warned me I had a visitor, but I was too focused on my misery to pay attention. People died that way, and I refused to be one of them.

Setting the bowl aside, I reached under my mattress for the knife I hid there. Yes, I could shift into one of my two dragon forms, but that was illegal and I’d rather have blood on the carpet than have to fix walls or go to prison. It was cheaper to clean the floor and the landlord would be none the wiser. Well, once I hid the body anyway.

Step after cautious step, I moved toward the door, keeping the blade ready. I’d stupidly only locked the door’s handle instead of the deadbolt and chain. Not that those would stop a determined dragon, but at least it would show I did my best to keep the intruder out.

This year’s goal is to use my website more to keep people updated on my books and life, and it’s still taking me some time to get this particular item up and running. But here’s the start. I’m going to try to keep consistent on this. What I’d like is for every first and third Saturday to be Snippet Saturday where I can post a small snippet from one of my books. We’ll see how you like them! Here’s the first, from “Gargoyle’s Pixie” the second book in the Gargoyle Collection. It’s a standalone, and book one doesn’t have to be read first for this book to be understood.

I leapt into the air, but I was barely off the ground before a strong hand came at me from the left, scooping me from the air and pinning my wings in his hold. The angle at which they were twisted sent a sharp ache into my back and I hissed past the pain. Wincing, I tried not to move.

“What have we here?” he mused with soft laughter. “Hello, pixie.”

Without being able to cross my arms in defiance since they were pinned in his hold as well, I settled for glaring at him. I was minding my own business. Why had he felt the need to capture me?

“Out spying for your swarm, huh?”

I continued to glare. There was no reason to admit to this gargoyle that I didn’t have a swarm. He wouldn’t believe me anyway.

“You found her?” the cheery female voice called from behind the gargoyle. “Can I see her?”

“Easy, Lari, you don’t know how many others are around,” another gargoyle spoke up. It sounded like the blond man. “They’re feisty when they’re in a large group. If it’s a scout, we’ll be fine. If it’s the whole swarm, then tonight is going to be rough.”

“Where’s your swarm?” the gargoyle who held me asked, but I turned away, closing my eyes. I didn’t have to answer to him. He shook me slightly, but for him, slightly was enough to whip my head back and forth in a violent motion. My wing pinched and I hissed again, but refused to show him the level of pain it had caused on my face. “Where is your swarm, pixie?”

“Stop manhandling her,” the female, Lari, said from beside the gargoyle. I lifted my eyes to her and found a tall, black winged gargoyle with long, strawberry blonde hair staring at me. “She’s pretty. I love your hair.”

“So, she does talk,” the gargoyle who held me mused. “You just don’t want to talk to me?”

“You’re holding me in your hand and pinching my wings. What do you think?” I growled, which was a stupid idea and I clamped my mouth shut.

He cocked a grin at me. “Would it be better if I held onto you by your wings instead?”

“I’m sorry. I can’t do that. We can’t have you running off to your swarm and telling them where we are, now can we?”

It was no use. I wasn’t getting out of this with my dignity intact. Heck, I was being held in a gargoyle’s grip. My dignity had already taken a low blow. It couldn’t get much worse.

Dropping my head, I mumbled, “I don’t have a swarm.”

The story I’d planned to do for NaNoWriMo was a fairytale retelling featuring dragon shifters. I’m not going to tell you which fairytale yet because that project is still on the docket and I’m not quite ready to drop that info, especially not when the writing of it keeps getting pushed back. It was supposed to have been completed earlier this year (much earlier) but it hasn’t happened yet.

So, anyway, that project got bumped for one that I thought up during my lunch walk on November 1st. Yes, the day of NaNoWriMo I up and decide to change my project. That thought was terrifying since there’s a limited time to get 50k words and I didn’t even have a plot for this book. That’s normal since I’m a pantser, but usually I have SOME idea of what’s going to happen. Here, again, I had two characters and that was it, but as the story began to unfold, everything started falling into place. By the end of Day 9, I had over 36k words. As a rule I don’t write on Sundays (I need the break and I consider it work), but I also took Saturday off too. My mind would not let me concentrate on words.

Now, I still have no idea how long this book is going to be, but the plot is coming together nicely, and I think you’re going to love it. The cover is ready to be revealed, but I’m going to wait a bit longer. So, be looking for that reveal in the coming months!

But the best news of all? I completed NaNoWriMo last night with just over 50k words! And still the story isn’t complete, so now to try and finish it by the end of the month. It’ll take a lot of work, but I think I can somehow manage it. But we’ll see. It’s been an adventure, and while bits and pieces show themselves as I write, I love being just as surprised as those who will read it by the twists and turns. 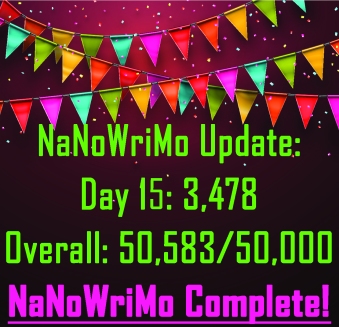 I’m slowly decorating my apartment for Christmas, which has only helped add to my love of writing, mostly because I love writing by Christmas tree light. So, decorating is a must. In the meantime, I’m going to be writing like crazy to get this story finished! Keep a lookout for cover, blurb, and release details in the coming months! (And I hope you enjoyed the above teaser…I wrote it in a car, but quit because writing was too hard with all the bouncing.)