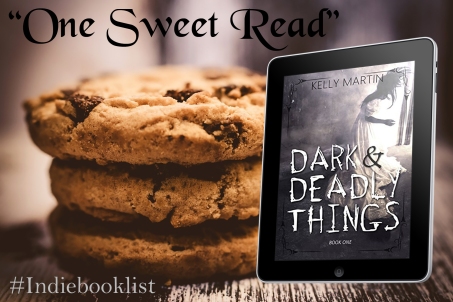 Maybe it’s my weird sense of humor, but I find it appropriate that Kelly Martin gets to be week 13. Honestly, I think I stalked Kelly Martin before she even knew I existed, and when I finally got to meet in her Roanoke, VA a few years ago, I was kind of freaking out on the inside. You see, one of the things I love most about Kelly is her accent. Love it! And she’s completely amazing! Actually, this past year at the Roanoke Author Invasion, I bought this book from her (come on, how could I pass up buying a signed book from her when her table was two away from mine???). Reading last year wasn’t something that was easy for me to do, but I’ve been slowly hacking away at my to be read pile, and this is near the top because it sounds soooooo good! Just remind me not to read it in the dark…(pun intended)

Since Elise Morgan left her father’s fake reality television show, Dark and Deadly Things, she put the ghost-hunting life behind her, able to comfortably watch from her couch– next to the ghost of her mother.

When the Halloween episode airs live on television, something goes horribly wrong. Four people end up dead, and Elise’s father is the lead suspect in their murders. But Elise knows the truth. She watched the thing that crawled from the darkness. It most certainly wasn’t her father.

Abel Hale was in the house when his family died. He felt the icy chill, heard the scraping of nails along the wall, felt the fear and gleeful anticipation as the entity stalked them. The thing that killed the people he loved was not human. There is only one person who believes him, one person who can help him– Elise, the daughter of the man he blames for his family’s death.

Reality mixes with fantasy as Elise and Abel’s world turns upside down.