I can’t believe it’s already time for another Snippet Saturday! This week I had the chance to do a cover reveal for my upcoming release, Phoenix Awakened. Today’s snippet comes from the opening scene of that book. If you like it, the book is only $.99 on pre-order! 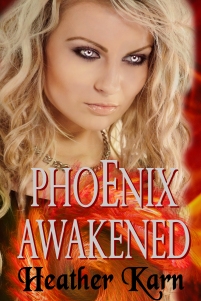 The keys clattered against the scarred and beat up desk where I tossed them the moment I strode through the apartment door. It had been yet another hellish day on the job and already tomorrow didn’t look much better. Sure, my promotion, if that’s what it could be called, now limited how many times a day I was yelled at, cussed at, and smacked around, but that didn’t mean it never happened. It meant it happened less often.

Kurt, my new boss, was better than most. He didn’t yank my ponytail until I was in tears or slap me. Nope, he gave me a pay cut. A large one. All because I’d lost some minorly important paperwork. I still wasn’t certain that the lady who I’d replaced hadn’t lost it, but I hadn’t found it yet either, so my argument was null and void. Not that I would argue with Kurt. None of us did.

With my thoughts on Kurt and my new, almost nonexistent budget, I flipped off the light I’d turned on when entering my apartment and settled for dinner in the dark. Thankfully my shifter eyesight made searching through cupboards for a valid excuse for a meal possible. However, it didn’t help fill the near empty shelves. There wasn’t much left to eat or in the bank.

“Looks like another night of dry cereal,” I grumbled to the darkness, setting a bowl on the counter as I weighed the almost empty box in my hand. Too light. Much too light.

Pouring half of what remained in the box into the bowl, I scowled at it before tucking the flaps closed and setting the container aside. All it took was three short steps to cross the studio apartment to sit on my rickety twin size bed. The metal frame screeched when I sat my weight on it and every spring in the mattress pushed against me.

The first chomp of cereal made me cringe. It wasn’t nearly as delicious as it would be with milk, and that was out of the question since I’d run out a week ago and couldn’t afford anymore yet. If I could consult the dragon within me, she’d tell me to bite into a juicy steak, but that was beyond hopeful. It would take a serious miracle.

A hard knock alerted me to company. My sharp hearing should have warned me I had a visitor, but I was too focused on my misery to pay attention. People died that way, and I refused to be one of them.

Setting the bowl aside, I reached under my mattress for the knife I hid there. Yes, I could shift into one of my two dragon forms, but that was illegal and I’d rather have blood on the carpet than have to fix walls or go to prison. It was cheaper to clean the floor and the landlord would be none the wiser. Well, once I hid the body anyway.

Step after cautious step, I moved toward the door, keeping the blade ready. I’d stupidly only locked the door’s handle instead of the deadbolt and chain. Not that those would stop a determined dragon, but at least it would show I did my best to keep the intruder out.