The story I’d planned to do for NaNoWriMo was a fairytale retelling featuring dragon shifters. I’m not going to tell you which fairytale yet because that project is still on the docket and I’m not quite ready to drop that info, especially not when the writing of it keeps getting pushed back. It was supposed to have been completed earlier this year (much earlier) but it hasn’t happened yet.

So, anyway, that project got bumped for one that I thought up during my lunch walk on November 1st. Yes, the day of NaNoWriMo I up and decide to change my project. That thought was terrifying since there’s a limited time to get 50k words and I didn’t even have a plot for this book. That’s normal since I’m a pantser, but usually I have SOME idea of what’s going to happen. Here, again, I had two characters and that was it, but as the story began to unfold, everything started falling into place. By the end of Day 9, I had over 36k words. As a rule I don’t write on Sundays (I need the break and I consider it work), but I also took Saturday off too. My mind would not let me concentrate on words. 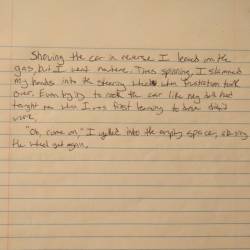 Now, I still have no idea how long this book is going to be, but the plot is coming together nicely, and I think you’re going to love it. The cover is ready to be revealed, but I’m going to wait a bit longer. So, be looking for that reveal in the coming months!

But the best news of all? I completed NaNoWriMo last night with just over 50k words! And still the story isn’t complete, so now to try and finish it by the end of the month. It’ll take a lot of work, but I think I can somehow manage it. But we’ll see. It’s been an adventure, and while bits and pieces show themselves as I write, I love being just as surprised as those who will read it by the twists and turns.

I’m slowly decorating my apartment for Christmas, which has only helped add to my love of writing, mostly because I love writing by Christmas tree light. So, decorating is a must. In the meantime, I’m going to be writing like crazy to get this story finished! Keep a lookout for cover, blurb, and release details in the coming months! (And I hope you enjoyed the above teaser…I wrote it in a car, but quit because writing was too hard with all the bouncing.)